Visit Vinga Lighthouse, which is Gothenburg's westernmost point. During the summer you can visit Evert Taube's childhood home. Feel free to bring swimwear and find a place to swim. It is possible to stay over on the island and during the summer there is a cafe open. You can also stop by your own boat on the island.

Vinga Lighthouse and its island
On the island is Vinga Lighthouse, which was built in 1890. The island is 500 meters wide in a north-south direction and about 1000 meters long in a west-east direction. The island, which is shaped like a U, is the last outpost of the North Sea. The island has been a nature reserve since 1987 and the state has owned the island since 1934. In the narrow part is the bay Gattulven which extends from the west side of the island and meets Midsommarviken in the east. It is also possible to visit the lighthouse and go up to the top. To the south is the smaller island of Koholmen and in the strait between the islands is the port of Vinga. 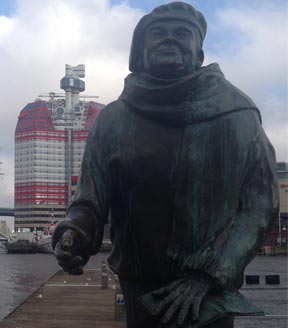 Evert Taube lived at Vinga
Our greatest poet of all time was born in 1890 in Gothenburg. He lived with his family on Vinga Lighthouse when his father was a lighthouse keeper on the island until 1905. His parents were Carl Gunnar Taube and Julia Sofia Jacobsdotter. At the same time, there were four other families on the island and the children had their own small school. For those of you who do not know, Evert Taube is probably best known for his songs. He also wrote poetry and prose. Over the years, Evert Tabue traveled on ships around the world and he learned to speak Italian, French and Spanish. Before he was recognized as a poet, he worked as a sailor, journalist and writer. Finally, he had to record songs on gramophone in 1921, such as Karl-Alfred and Fritiof Andersson. In 1931, Evert Taube finally became famous - with his song "Calle Schewenes Vals". Then it rolled on with gigs at Gröna Lund in Stockholm, radio and TV. Evert Taube died 1976.

Evert Taube stands as a statue down in the harbor on the same wharf as Gothenburg Opera. The statue was created by Eino Hanski and placed in its place in 1996. 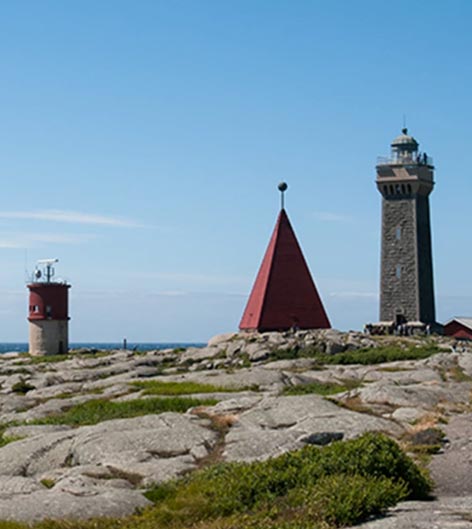 Today's lighthouse is located opposite where the two previous lighthouses stood. When the new lighthouse was lit, the other two were extinguished. Vinga also has two lighthouses that mark the fairway from Vingasand towards VInga past Limgåden and Bukskärsbåden, they are called "Vinga Östra övre" and "Vinga Östra nedre". They stand east of the main lighthouse. There is another lighthouse on the island, Vinga kids which is located about 300 meters northwest of Vinga's western cape.

The first guard on the island
In 1646, a cottage was built for the first navigation mark keeper Torkel Smed. The first lighthouse lit on the island was November 15, 1841. It was actually the third in the order and had a solid white glow

Lught House for the keeper
The lighthouse keeper's house was built in 1854 and has been renovated in various stages.