Take a trip to the Fort

Book a trip to Älvsborg Fortress in Gothenburg!

You can visit Älvsborg Fortress during the summer from July to early August. It's a lovely trip by boat in about 30 minutes from Lilla bommen. During the tour you will see Gothenburg from another direction - water. You get lovely views on the way out to the fortress. Onboard you can either sit inside or outside. Sorry to say that the boat will not depart during year 2022. We will wait for next year instead! 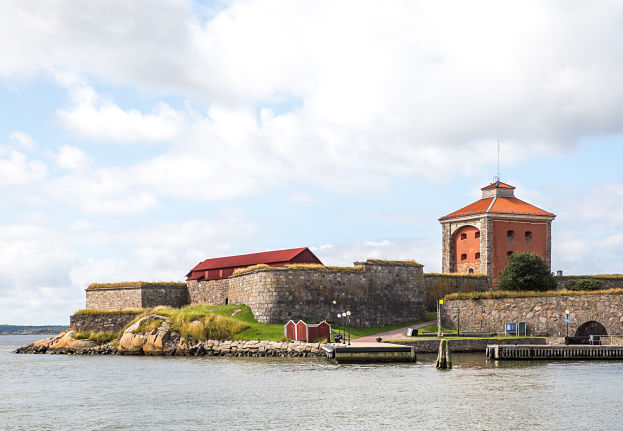 In summer you can go out to New Älvsborg Fortress and spend a day there. A nice summer day, it is really nice to go out to the Island. The boat departs from Lilla Bommen and the trip out takes about 30 minutes. You get to see much of the Gothenburg harbor. When you come to the fortress, you are welcomed by a dramatized tour that you can hang on without any additional cost. These tours usually highly appreciated. You will learn both about the fortress and how it was to live out there. On the fortress island is also a cafe. Otherwise, you can bring your own picnic basket and sit on the blanket on a cozy place and just enjoy the summer.

Guiding is included. The trip out to New Älvsborg Fortress is very popular so it's best to book your tickets online in advance. Ticket queues can be bery long a nice summer day and then it's nice to already have their ticket fixed. The boat departs three times a day from Lilla Bommen, you choose when you want to go back.

War with Denmark and what happened next? New Älvsborg Fortress was attacked several times by the Danish fleet, between 1717-1719, but it was never entered. Fortunately it was, because what would Gothenburg have been today otherwise ... Danish maybe? Even today, you can still see the cannon balls sitting in the fortress church. Lucky the walls were so thick!

History
New Älvsborg Fortress (Nya Elfsborg) began in 1653 after a fortification plan of the general Johan Wärnschiöld and was not finished until 1677. Between 1653 and 1677 a civil war broke out in 1657 and then the work temporarily was stopped.

Before Älvsborg was built was the first fort on the mainland that we today call the Old Älvsborg Fortress. Old Älvsborg is documented in old documents already in 1366. In 1563 and 1612, the fortress was conquered by the Danish. Swedes had to pat ransom each time to recover the fortress.

The ruins of the Old Älvsborg located next to the Rock (Mr. Svante Street). Take a ride to this place and walk around the ruins and imagine how it could have been here in the old days .....

Some fun facts
When the "Old Älvsborg Fortress" imposed as a defense facility in 1660 a lot of stone is taken from the fortress to use the be used in the construction of the New Älvsborg Fortress.

Prison
From the late 1700s to 1866 the forttress was a prison. In 1868 ended Älvsborg Fortress as a defense facility. After the peace with Denmark in 1720 the fortress started to become more and more a ruin.

Some Commandants on the Iland?
1814-1843 appointed Major Krook as commandant of the Elfsborg fortress. At this time, there were several prisoners on the island. After Major Krook took Colonel Carl Gustav Qyanten over 1843. He was amoung others known for his violent temper. He put people in jail on the island if they didn´t "fell" to his liking ....

Other
The fortress also offers conference, wedding (on the island there is the small church inside the fortress tower. The church on the island was inaugurated in 1706) party, and at Christmas time they also have Christmas tables. Or why not bring your work mates or your friends here and challenge them in a fight.

Book Scandic Hotels
Booking.com
Book hotels in Goteborg
Tickets are presented in collaboration with Strömma. We reserve the right to ev. changes to content. Always be sure to read and read website what is included in your booking. If you have any questions about your reservation, contact Strömma. Pictures: Strömma.
Map - Lilla Bommen
Top